Six months after a story celebrating the fact that all graduating seniors at one of D.C.’s lowest-performing high schools were admitted to college, NPR has reported a major qualification. Most of those students missed more than six weeks of school, and teachers and students confirm that many who graduated didn’t meet minimum graduation requirements. 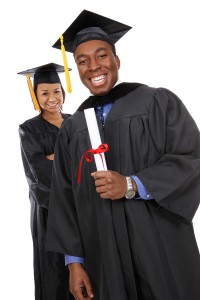 This is a story not just about one low-performing high school in D.C. but rather a cautionary tale about what can happen anywhere when administrators and teachers are pressured to do the impossible: ensure that students who enter high school years behind grade level nevertheless graduate within four years. Ballou High School may be an extreme example, but there’s evidence that stories like this are behind much of the recent ballyhooed increase in the graduation rate.

Back in June of 2017, NPR ran a feel-good story on All Things Considered about Ballou’s apparent success in getting all 190 of its graduates accepted to at least one college–despite the fact that only 3% of students at the school had scored proficient or above on reading tests in 2016.

“With high dropout rates and low test scores,” reporter Kate McGee asked in the story, “how did this happen?” Her answer at the time: strong support from within D.C. public schools, plus donations that financed college tours.

Still, something seemed fishy. Especially after the Washington Post reported, earlier that same month, that more than a quarter of the teachers at Ballou had quit since the school year started.

To McGee’s credit, this week she–with help from others at NPR–followed up. This time, the explanation for the 100% college acceptance rate was, in the words of one teacher at the school: “smoke and mirrors.”

Nearly a dozen current and recent Ballou teachers told NPR they were pressured to pass chronically absent students and others who lacked the credits to graduate. Some of these 12th-graders were unable to read and write. If teachers complained about the situation, the administration made sure they got poor teacher evaluations. (And somehow, the size of Ballou’s graduating class shrank from 190 to 164 between NPR’s story in June and the recent follow-up.)

McGee and NPR deserve kudos for uncovering the seamy underbelly of their feel-good story. And the Washington Post–which never reported the 100% college acceptance rate but did report, in March, that all seniors at the school applied to college–deserves serious criticism for apparently ignoring the scandal. (As of this writing, they haven’t even mentioned it in their coverage.)

Some in D.C. feel the Post does a fine job of covering education. And it’s true their story about teacher turnover at Ballou and other schools was a good investigative piece, along with another one in July about how schools are making their suspension rates look lower than they truly are.

But anyone who has tried to cover education in D.C. (as I have) knows that there’s a lot the Post overlooks. And in recent months, as its new ownership seems to be directing more resources towards national news, the paper’s local education coverage has suffered. High turnover on the education beat hasn’t helped.

On the Ballou story, fortunately, NPR and its D.C. affiliate, WAMU, stepped up to the plate. Let’s hope they’ll continue to do so on other stories. But that probably won’t change the sad fact that no one is devoting much attention to education analysis in D.C.

Theoretically, the Post has two education columnists who are supposed to provide this kind of local analysis. But one, Jay Mathews, lives in California and usually rehearses the same themes he’s been harping on for years. The other, Valerie Strauss, has a predictable and reflexive viewpoint (anti-Common-Core, anti-charter school and anti-education reform in general). And most of the time, she simply reprints columns written by others–most of which have nothing to do with D.C.

A story like Ballou’s cries out for analysis. Why did this happen? How can it be prevented from happening again? What’s the solution to the seemingly intractable problem of high school seniors who are far from being ready to graduate? And how long will these poorly prepared students last when they get to college?

Here’s my own two cents. Mandating increased graduation rates–or any other reform that focuses solely on the high school level–will never work when you’re dealing with a student population that is far from where it’s expected to be. Like banning suspensions or pressuring schools to boost test scores, these superficial, top-down reforms can only lead to subterfuge and the devaluation of a high school diploma. (Just look at Prince George’s County for another homegrown example.)

With heroic efforts, some high schools may be able to take entering 9th graders who are reading at a 4th or 5th grade level and truly equip them for college–but probably not in four years. Some D.C. charter high schools that have seen good results–like KIPP College Prep, Washington Latin, and Thurgood Marshall–prefer to keep students for five or six years rather than graduate them, unprepared, in a mere four.

But the better solution to this problem is to look to where it begins–not in high school but in elementary school and before. Especially in high-poverty elementary schools, we waste precious years by giving kids a steady diet of reading and math rather than building their knowledge of the world by immersing them in history, science, and the arts. The theory is that practicing “reading comprehension strategies” like “finding the main idea” day after day on simple texts will equip students to read any text that gets thrown at them, including a high school textbook, regardless of whether they have the background knowledge that would actually enable them to understand it.

As cognitive scientists have long known, that way lies disaster–the kind of disaster NPR has uncovered at Ballou. If we want low-income students from less-educated families to get the same kind of high school education their more affluent peers are getting, we need to give them access to the same knowledge those peers are taking in at home. And we need to start giving it to them as early as possible.