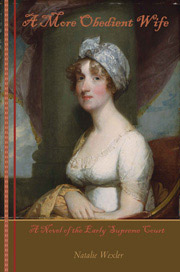 A unique blend of actual 18th-century letters and sensitively imagined fiction, A More Obedient Wife tells the story of two women in the 1790’s—each in a troubled marriage to a Supreme Court Justice—swept up in the little-known but fascinating early history of our nation’s premier judicial institution. Hannah Iredell, shy and insecure—and saddled with an embarrassing alcoholic mother-in-law—is plagued by doubts about her husband’s fidelity. Hannah Wilson, flirtatious and only nineteen, marries a distinguished and extravagantly wealthy man thirty years her senior, but is soon dragged down into poverty and disgrace. When Mrs. Wilson finds herself attracted to Mrs. Iredell’s charming husband, the two women’s differences escalate into mutual hostility—until dramatic events lead them to form an unlikely friendship.

Winner of two awards, A More Obedient Wife has been described by reviewers as “riveting” (Midwest Book Review), “compelling” (Historical Novels Review Online), and “definitely one not to be missed” (Reader Views).

Praise for A More Obedient Wife

"A pleasure to discover a new award-winning writer with a decided gift for storytelling ... Deftly written and complex ... A riveting read and highly recommended for both personal and community library historical fiction collections."

"A surprisingly spicy novel from the high court's early days... Wexler knows her material and conjures up a convincing picture of a little-known era ... Fans of David McCullough's `John Adams' should find this novel enthralling."

"A book capable of gripping the hearts and minds of its readers, a memorable tale of love and friendship played out against the background of the United States' Federalist period."

"Compelling in its portrayal of a turbulent time in American history and its effects on the often forgotten women of the day... What makes the story memorable is the personal, intimate lives and relationships of the two very different ladies. There is a deep understanding and compassion for their situations."

“I found myself unable to put the novel down. A great book for discussion for a women’s readers group. Definitely one not to be missed!”

“The ghost of a love affair, excavated from long-forgotten letters... Wexler has absorbed the language, rhythm, and nuances of the letters to such a degree that her narrative flows together with them seamlessly.”